In the heart of the historical part of Delhi, neighbouring the Red Fort, Chandni Chowk, Jama Masjid and the colonial St. James Church, Nina Kochhar offers a genuine home-stay in quie
green, scenic, secure, low-rise surroundings at the elite Oberoi Apartment complex, where her only guest room ensures that YOU  ARE THE VIP at any given time.
www.delhibedbreakfast.com

Traffic Traumas
Roads in India range from the sublime to the ridiculous.  Along with sleek six-lane highways, especially along the Golden Triangle route of Delhi, Agra, Jaipur, co-exist the off-village dirt roads which lead to opulent farmhouses.  But mainly, the ordinary road is pitted and puddled, containing many hazards like open manholes or sinking patches. Even more hazardous is the traffic – streams and streams of the most amazing range of vehicles.  Sleek Audis of the wealthy businessman or the landlord coexisting with motorized vehicles of the handicapped; the notorious tuk-tuks or auto-rickshaws;  the non-motorized cycle-rickshaw which is hired by the peddlar by the day or week or month, and whose complete residence it is – he eats and sleeps in it in between his exertions. Hand pushed vegetable and fruit cart parked on the sides of roads, making them narrower; man-pulled  goods carts in narrow wholesale market roads.  The varieties and numbers of cars ranging from Mercedes to the small  Maruti Suzukis.  And the bikes, oh the BIKES which buzz and weave intricately through any traffic,  often without silencers, with their horns sounding like trucks. The trucking traffic itself, when the metro-city  roads open to them at night. Side by side with the occasional elephant with it’s large droppings.  A row of camels on the road around Republic Day in Delhi.  Camel carts, buffalo carts, donkeys with panniers full of construction material.  And near the villages, chickens, ofcourse dogs, many monkeys and the not-so-rare tonga – a horse drawn buggy. Then the scooters easily accomodating families of four and sometimes five.  Not to mention huge buses abiding by no lane-changing rules, swinging  past (and narrowly missing) darting pedestrians, often crossing the busiest parts of the road, laden with bundles on their head – especially the village women.  Honking vehicles, relatively narrow roads, diesel fumes and no patience whatsoever.  Most roads are two-way with traffic lights often not working, often ignored and to top it all, with pouring monsoon rain three months of the year! 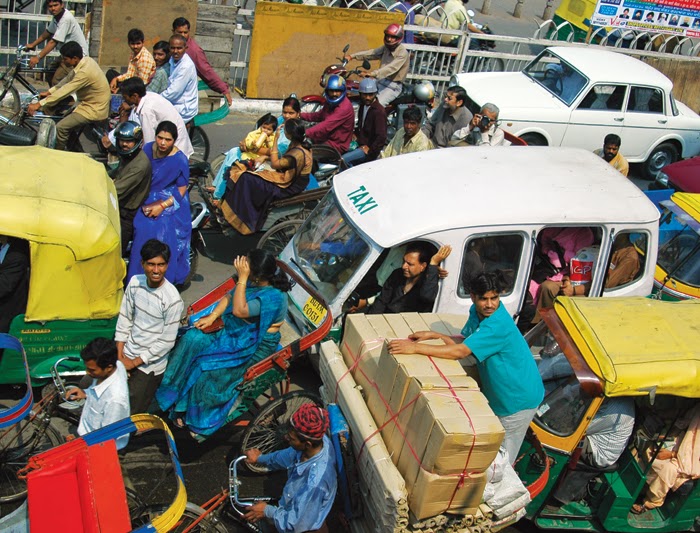 The marvel is the survivorship!
Traffic jams in cities are the rule and not the exception, and the standard excuse for not having reached any meeting on time.
I could never get an international driving licence to drive in any other country, because with 40 years of driving experience in Delhi, I could never imagine  thinking  about overtaking from the right,  not the left;  not blowing my horn; changing lanes well before the turns; not stopping in the middle of the road to ask directions or to drop a passenger, or suddenly sticking my arm out to indicate that I am suddenly going to turn, so the guy behind me should wait.  As if I gave him enough time for it to register!  Then ofcourse, the language that ensues and the frightfully angry accusations and justifications.
I haven’t yet mentioned night-driving on high beam in the middle of metro city roads.
As a knap-sacked traveller trying to cross a busy road, you might make for the zebra-crossing to wait for a lull in the tide, but whether  you are walking or driving, do it defensively....the civility of some driver waiting till you cross the road is rare, so all the more amazing when it happens.
My first visit abroad was to Paris, and it took me quite a while to realise what was missing there......so many cars whizzing on the wrong side of the road.....and  not a sound of horns anywhere!
P.S.  A small news report once said that Traffic Police had issued a directive that no elephants would move on roads at night without reflectors down their tails.  A wise thought .... I’d hate to collide with their slowly rambling backsides because they were invisible in the dark.  Almost as bad as getting pierced by iron rods jutting out from behind open carriers, because someone forgot to put the red-rag on the longest one. 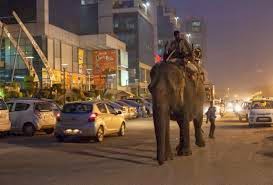