Wedding Festivities  (Mostly Reproduced from an explanatory booklet in Pooja and Karan’s Wedding Card, with small additions by the author).

Hindu Wedding Ceremonies are traditionally conducted in Sanskrit, but the language of the families is also used.  The Hindus attach a lot of importance to marriages and the ceremonies are very colourful and extended for several days.  The primary witness of a Hindu Marriage is the fire –deity (or the Sacred Fire) Agni, and by law and tradition, no Hindu Marriage is deemed complete unless in the presence of the Sacred Fire.

The sage of the below-mentioned Vedic Verse has emphasised that the basis of a happy and fulfilling married life is the sense of unity, intimacy and love between husband and wife.  Thus, marriage is not for self-indulgence, but rather should be considered a lifelong social and spiritual responsibility.  Married life is considered an opportunity for two people to grow from life partners into soul mates.

Marriage is a holy sacrament and a lifelong commitment of two individuals entering into an eternal partnership to realise the ideals of Satyam (Truth), Shivam (Goodness) and Sundaram (Beauty).

IN THE LEAD UP TO THE WEDDING
SANGEET
The Wedding is not only filled with serious rituals and customs but it is also full of several lively moments.  The Sangeet function is typically an evening of singing and dancing designed to make the emotional wedding affair somewhat light and amusing.
“Sing and dance together and be joyous, but let each of  you also be alone, Even as the strings of the lute are alone, Though they quiver with the same music” Kahil Gibran.

It is an opportunity for relations of the bride to get together; to the sound of the dholak in Punjabi weddings, each relation of the bride (nowadays the groom’s family is also involved), is identified in song, then  identifies himself/herself by  dancing solo within a circle,   to the Bhangra beat. That’s the way he/she is recognised by the entire group.

MEHENDI
Mehendi, internationally known as henna, is an age-old form of temporary skin decoration.
The occasion of Mehendi is one of the most important pre-wedding rituals during which henna is applied to the bride and other female guests.  Popular motifs of the bridal Mehendi are conch shell, flowers, kalash, peacock, and wedding patterns. There are many beliefs and myths associated with the Mehendi.  It is believed that the darker and deeper the henna stains, the more the mother-in-law will love her new daughter-in-law,  The ritual of Mehendi signifies the strength and power of love in a marriage so it is regarded as a good omen for the bride-to-be. 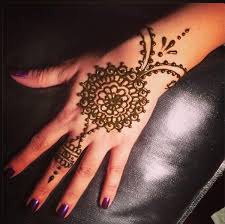 ON THE WEDDING DAY

BARAAT
Baraat is the Bridegroom’s Wedding Procession.  Traditionally the groom arrives on a white mare accompanied by friends and family dancing to music. (Before his departure from his family home, the a Sehrabandi ceremony covers his face behind a light mask of flower strings.  All the men of the family are given matching turbans to identify them as relatives of the groom).  Lamps light his path and raucous dancing and singing on the road indicate to all, “give way to the wedding procession”.

AARTI
Aarti (traditional Indian welcome ritual with a lamp or diya placed on a platter or thali) is performed by the bride’s mother to welcome the groom.

MILNI
Milni is the meeting between the bride and groom’s family members to signify the union of the two families.  This is done by the bride’s family putting flower garlands on the groom’s family.  (All the male relatives of either side wear a turban of the same colour, so they can be identified easily by the other side).

JAIMALA
Jaimala is the exchange of garlands between the bride and the groom.  The bride and groom garland each other as their initial commitment to one another.  After this the couple proceeds to the Vedi where the actual Wedding Ceremony is performed.

WEDDING
The Wedding is solemnizd with four important rituals:  Kanyadaan, during which the bride’s father gives his daughter’s hand to the groom;  Saprapadi or seven steps in front of the sacred fire;  Sindoor when the groom applies vermilion to the girl’s hair partition and Mangalsutra Rasam the necklace of black beads in gold are placed around the bride’s neck.  When all these rituals are over, the couple is showered with flower petals, as a blessing from all present.  They then seek the blessings (Aashirvad)  from all the elder members of the family for a happily married life (by bending and touching their feet as a sign of respect and humility).

VIDAAI (DOLI) COMPLETION OF MARRIAGE
This ritual marks the completion of the Marriage Ceremony and is one of the most emotional aspects of the Wedding festivities.  It is the formal departure of the bride from her parent’s home with her husband.  As the bride leaves, she throws five handfuls of rice over her head.  This signifies that the bride is paying back whatever her parents have given her and wishes for prosperity to always flourish in the house she grew up in.  She is then seated in a Doli, a traditional Indian palanquin, the customary way to depart from her parent’s home.
“I seem to have loved  you in numberless forms, numberless times, in life after life, in age after age forever.” Rabindranath Tagore.

When I was a small girl I vividly remember the excitement of travelling from Calcutta to Delhi for a young aunt’s wedding. Being fitted out with new, satiny salwar kameezes; ladies sitting out in the Delhi winter sun peeling peas by the “maund” and separating fenugreek leaves from their stems; men arguing about the arrangements of the shamianas (tents), the hammering, and the cooking for days on end!  Now, ofcourse, everything is “outsourced”and all one has to do is to agree on the price with the event manager!  Anyhow, it’s always THE BIG, FAT INDIAN WEDDING!